For thirty-one years now, I've been blessed to be a mother. I am a mother to two of the most spectacular individuals in this universe, and of a precious angel baby, who is the driving force behind these ch8se adventures.

For thirty-one years, I've appreciated flowers, jewelry, cards, hugs, kisses, purses, perfumes, and all of the traditional "Mother's Day" gifts you can think or name. This year, intentionally, needed to be different. You know, when you always do what you have always done, you always have, what you have always had. Mother's Day, May 12, 2019, I purposed to do, and to have different. So I did, and was fortunate enough to share it with my first born, my mini me, my Don, and 18 other daughters, and mothers, in a uniquely special, ch8se kinda way.

When planning the ch8ses, the dates are strategically, based on my life's availability, with consideration given to special occasions. Honestly, we were skeptical to schedule a ch8se on mother's day, for a number of reasons. We did a poll to gauge interest. We had several conversations, and even unsolicited opinions and comments of reasons why we should not ch8se on mother's day. The interest did not appear great, with a very low participation rate; however, the universe constantly urged me to proceed as planned. Despite some negative feedback, despite the low interest, despite the momentary doubt, we are so, so elated that we ignored it all, and followed the universal prompting to continue as planned.

The "ch8se chariot, Choppa" needed some TLC, and didn't make this ch8se; however, it afforded this ch8se champion, the opportunity to have a "driving Ms. Daisy" sort of experience, thanks to my mini me.

Following my Mother's day plan, despite it all, brought twelve mothers, seven of which are grand mothers, four sets of mothers and their daughters, two mother's of bonus kids, eight daughters without children, five daughters whose mother has transitioned, and three mothers of angel babies. Our youngest mother was thirty-one, and an amazing sixty-five year old queen, was our eldest mother present. Of the twenty ch8sers, nine of them were new to the ch8se. Our Mother's day ch8se, was their first @ch8singwaterfalls experience. We hope it proved to be a memorable one, and one that would encourage them to return to a future ch8se.

The liquid sunshine led the way, and stayed with us the entire time. This was a ch8se first. Typically the rain lifts and gives us a relatively dry ch8se. Not this day. We caught a few breaks here and there, but for the most part, it was a beautiful, liquid sunshine kinda day. Yes, we are some true badass, determined, mother and daughter lovers of a good ch8se. We ch8se rain or shine, 'cause it all ends up fine. This is what we do.

For this ch8se, we chose to gift each mom, each ch8ser with a lil sumthin' sumthin' to both celebrate the day, and their support of the ch8se. We have had people make donations, and share items with us, specifically to share with the ch8sers, and I decided Mother's day was a good place to share. Everyone drew numbers, and we tried to pass out gifts prior to the ch8se, but the liquid sunshine had another idea, so we did so afterwards. We hope it was well received.

You never know what a ch8se adventure may unfold, you just never know. (*If you are a merchant and have an item you would like to gift to the ch8se to be shared with our ch8sers, please contact us. We are happy to help you market your goods in our community.)

Often times in planning the ch8se, we give consideration to our intentions, our expectations, and the impact of it all for our ch8sers as well as for us. We intentionally create a space of freedom and unity, while birthing healing, welcoming boldness, and inviting peace. These are the true elements of the ch8se. Often times, we intend to stop and smell the roses, yet get caught up in conversations, or in our personal moments, that we forget to actually stop. With this ch8se, we were determined to stop. Within the walk before the talk, we shared with the ch8sers, our intention. Just as planned, at a point where the liquid sunshine had paused, the birds were singing, nature was speaking, we stopped. We stopped talking, we stopped thinking, we stopped complaining, and walked in silence. We encouraged each ch8ser to just be in the moment, nothing more, and nothing less. Though, we literally have the best conversations, while ch8sing waterfalls, honestly, it was refreshing to calm the chatter, and just be present. It was perfect.

We decided to keep this location near home to afford an early end to the ch8se adventure. This was our second time visiting this location, and once again, it proved enjoyable. We unfolded two falls. The first fall on the trail, was not as full as it was before, but beautiful nonetheless. The second one was fuller, and provided the best backdrop to some amazing pictures. I believe some mothers and daughters may have captured their new favorite pictures together during this ch8se experience.

Our resident waterfall whisperer, and my mini me led the ch8sers to the top of, and into the waterfall. There were ten or eleven ch8sers who climbed to the top and enjoyed the extended experience. Ms. Awesomeness herself met Dora, the mini-me version times 2, minus twenty years. I think they had a great time.

Mothers and daughters created new memories. We shared experiences, and stories along the ch8se. We overcame challenges, and celebrated victories. We captured countless pictures and selfies, and enjoyed the first ever mother's day ch8se adventure.

We knew that scheduling a ch8se on mother's day, or any holiday for that matter, would pose a lunch challenge. Several ch8sers left at the end of the ch8se, while an eight car caravan attempted brunch at a little restaurant that did not seem equipped to handle us, nor was it appealing. We left that location and headed to Cracker Barrel, which presented with a fifty minute wait. Many of our ch8sers decided to leave and avoid the wait, which lowered the number to be seated, and decreased our wait time. After thirty minutes or so, we were seated, enjoying good food, and great conversation. We were pleased with the outcome, despite the crowd of mother's,celebrating their day. 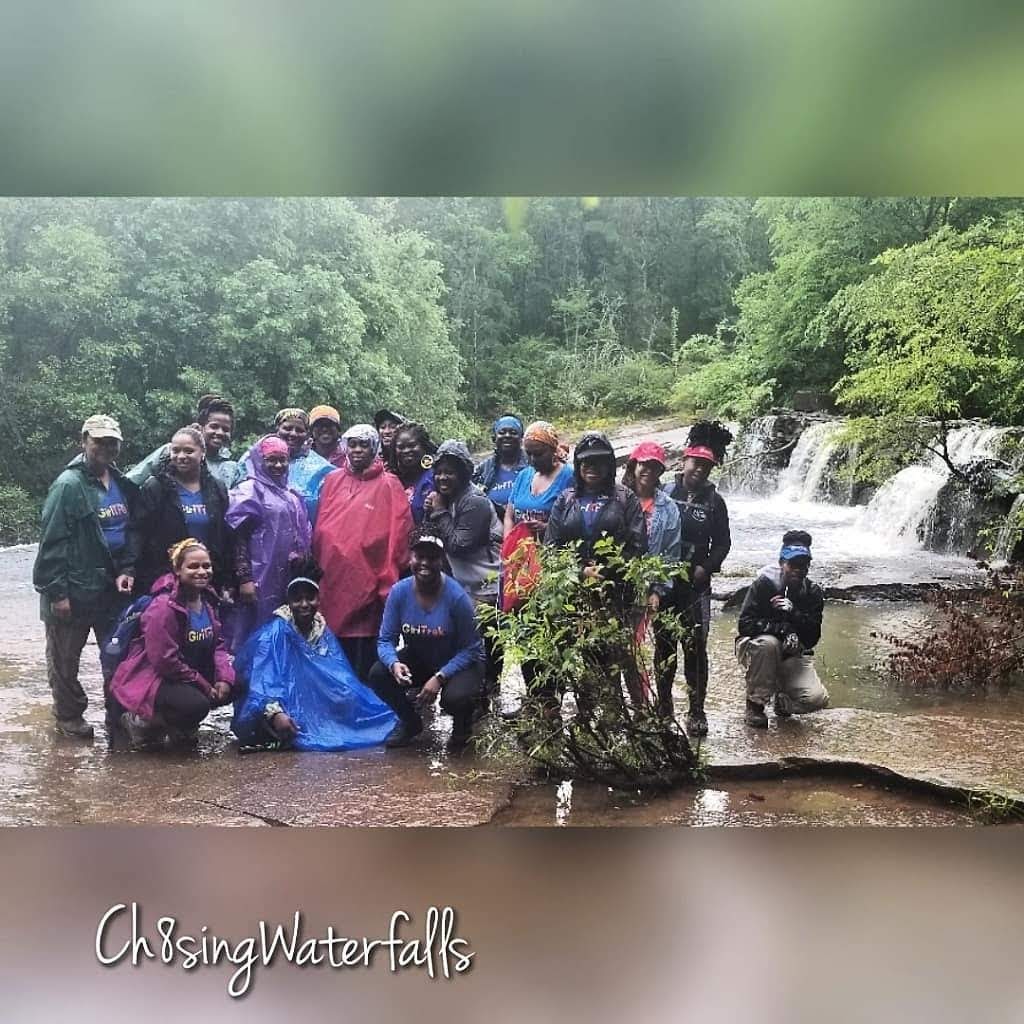 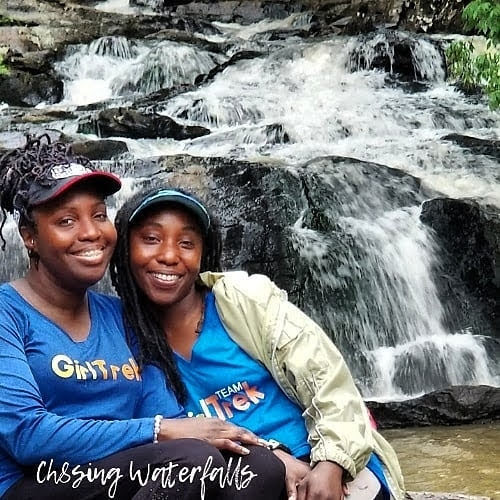 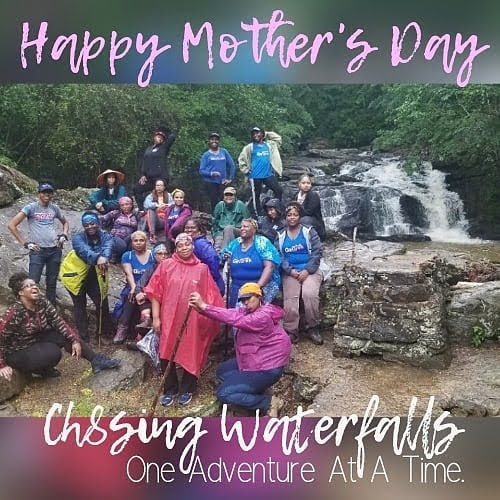 We are proud to say, the first official Mother's Day Ch8se adventure, as wet as it was, still was a good day.

Thank you for continuing this ch8se journey with us and supporting the healing it unfolds.