For the second year in a row now, I have had the blessed fortune to celebrate my bEarthDate with a ch8se. Though my actual bEarthDate is 6.20, the celebration continues on.

The bEarthDay Ch8se Crew, Minus Two

Chapter 22 was a first in a number of ways. It was the first ch8se that I had not personally scouted, nor was there the a sister there who had scouted this location to lead us. My alter ego, Dora the Explorer, had no reservations or concerns with this being the case, nor were the twelve pack of ladies who were eager to be as adventurous as Dora and explore the beauty that was awaited our arrival.

We descended upon Rock Island State Park with three car loads of awesomeness. There were thirteen of us total. We welcomed three new women to GirlTrek Nation and to the adventures of the Ch8se, and welcomed one ch8ser back from a sort of ch8se hiatus. (smile) 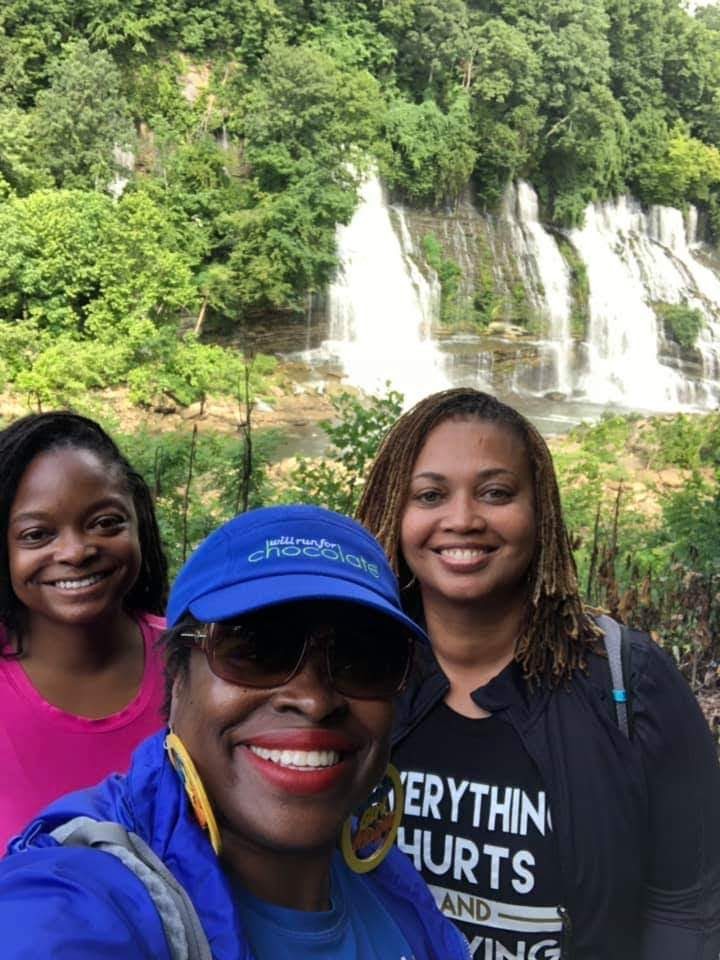 The location of this waterfall took us down a long winding road, filled with the most beautiful, and full foliage. The amazing trees, standing tall, with their lush green leaves and strong branches welcomed us, as if they were awaiting our arrival. I found myself daydreaming along the drive in appreciation of everything spectacular, and all things magnificent that exist whether we embrace it or not. We had driven nearly three hours by this time; however, it was at this point of the drive that the universe spoke to me and entered me into a place of humbleness and appreciation for this ch8se and all those that have come before it. It was at this moment, during the drive down natures natural gateway that I was engulfed with unexplainable thanksgiving.

This ch8se has special meaning as I am blessed to now solidify my bEarthDay ch8se as an annual adventure. Happy bEarthDay to me. You ch8sers are the best, thank you for continuing this journey with me.

Now as we enter beyond natures natural gateway, my version of it that is, there is a parking lot off to the right. This lot was the intended destination; however, what ended up being our unintended, lead car had driven ahead and led us to the very top of the stairs which placed us immediately in front of the most spectacular waterfall ever.

This ch8se champion received several social media messages that shared the beauty of this wonderful space in this big old world. One of our GirlTrek super sheros had explored this space, and shared the beauty with us first hand. Originally, I had planned to return to the bEarthday ch8se location of 2018; however, after receipt of several shares, it was inevitable that Rock Island State Park would be the bEarthday ch8se location for 2019. I am so glad for the universal intentions that led this location to be a part of the ch8sing waterfalls history.

The awtastic (awesome & fantastic) roar of the massive waterfall immediately sucked me in and forced me into its power. The magical force that fills the sound of the waterfall is filled with a special kind of wonder. It is the best sound with the most undeniable energy. The roar is so powerful, it pulls you in and controls your senses as long as you yield and allow. The Twin Falls at Rock Island State Park was all of this and so much more.

We began with our countless groupies, selfies, and all out photo shoot. Typically this happens in the middle or near the end of the ch8se; however, the falls were right there in the beginning, of course, we had to do what we do.

After many selfies and group shots, we proceeded on and hiked the trail along side the waterway, across from the waterfall. This was a shaded, tree lined space, in perfect parallel to both hear and see the waterfall. We ventured into the trail, uncovered tucked away gems, and a hidden miniature waterfall, or flow of water. Such a welcoming surprise find.

We hiked about a half mile in to the point the dark clouds, and roar of thunder prompted our turn around. The air became cool and the wind picked up quite nicely. It was at this turn around that we knew we were on limited time to avoid the down pour. As with most ch8ses we encounter a shower, sprinkle or downpour before, during, or after the ch8se, without fail. This one actually led us out of the woods. By the time we reach the clearing, the sky opened up and forced our umbrellas, ponchos, and quickness in our step. If you stay ready, you don't have to get ready, and ready we were.

Back in our caravan, we head to our lunch spot, Cumberland Biscuit Company, McMinnville, TN. To our surprise a car show was coming to an end, yet afforded us the opportunity to enjoy some pretty unique rides. We enjoyed lunch with great conversation, sharing the ch8se experience and totally relishing the moment.

It is during our lunchtime that we are each able to share the ch8se adventure, and identify the space by which the ch8se has ushered us into. Ladies share their highlights and each represents similar, yet uniquely different sentiments, which is truly what makes ch8sing waterfalls undeniably moving and priceless.

The carpool conversation, meeting new sistas, learning new things, exploring green spaces with brown faces, conquering fears, snatching victories, and stepping all the way out of comfort zones are just a few of the take aways shared by the ladies who helped narrate this chapter of ch8sing waterfalls.

After lunch, we enjoyed the cars, of course took more pictures, and hit the road home. On the way, there was the most breathtaking Tennessee overlook, that drew us in and forced us to stop. We pulled over, parked, took more selfies, groupies, and for a few minutes in time, enjoyed more amazing universal wonders. Stopping to smell the roses, though may not always look like roses, it's so important to just stop. The overlook, the waterfalls, the roses are all seeds that have already been planted, intended for our enjoyment, why would you just speed by your and not at least take a sniff?

A few naps here or there, more great carpool conversation and several hours of highway driving and everyone returns home safely.

Once again, thanks for trusting this ch8se champion with your ch8sing waterfalls adventure. Until we ch8se again,